Last night, when I was swapping out the Corsair HX650W power supply from my Compaq Presario SR5120AN desktop computer to use in my VMware server, I noticed a bad or failed capacitor.  So, you might ask – what are the obvious signs of a failed or failing capacitor that it is possible to see with the eye? Here is a photo of the motherboard that I removed from the desktop this morning. 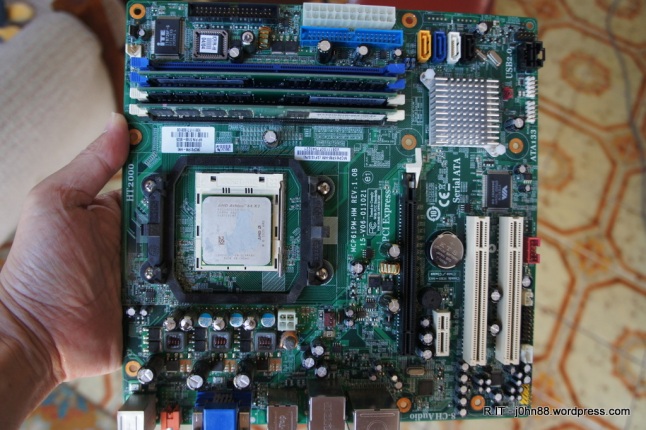 The electrolytic capacitors that quite often fail are those with aluminium cans – these are the common types that fail due to over-heating.  What happens is that the dielectric material inside the capacitor is an electrolyte that will dry out either with time or through over-heating causing vents to open.  The venting of capacitors can occasionally be an explosive event with a loud bang – if anyone is around to here it.  Sometimes if you are lucky – you might hear a fizzle.  Can anyone with sharp eyes see anything unusual on the motherboard?

Sounds of suspense here – tick tock tick tock…  Ok, see that there is one capacitor on the top left – which has a bulged and blackened top, then another four in a row beneath the cpu?  Usual signs are bulging of the top – a sign of over-pressure caused by over-heating. If the vent opens, then electrolyte is released – this is that black stuff.  The bulging with or without dark/black discolouration is how a bad or failed capacitor will “reveal.it“self. On the top of the other capacitors, you can see something like a cross or a T shaped logo – this logo is actually the vent, where the aluminium is deliberately weakened so that failure occurs along the crease marks.  These capacitors are 1800uF 6.3V rated up to 105 degrees Celsius.  There are another four of these that would appear to be intact on this motherboard.  I don’t have any of these in my parts stock so will need to order.

Usually we would replace all of the ones that fail and including those of the same brand and type that have not failed, so I will need nine of them to be ordered.  I don’t have to replace the other four as they haven’t yet appeared to fail, but generally speaking, it is just a matter of time – so best to get the hard work done now instead of doing it again later. Why hard work? Motherboards are multi-layered board that can be very difficult to work on even with specialized desoldering equipment.  Sometimes no matter what, a capacitor may stubbornly resist being desoldered – and usually when this happens, we have to get the cutters out and cut it off the board, then use a soldering iron on one side of the board and desoldering iron/tool on the other side.  I have had to do this once or twice.

You may also notice that I had removed the cpu heatsink.  The thermal material has gotten quite old and is brittle and flaking off – I have cleaned it off and put in Arctic Silver 5. Then reinstalled the motherboard since it is still working, with the occasional freeze and blue screen – I am typing this right now on that desktop.  Anyway, that’s it for now.

[Note]  Desoldering equipment should be maintained regularly.  Due to the higher temperatures involved, the desoldering tip can go black from oxidation and then it will not transfer heat well, which requires increasing the temperature, which makes it worse, etc, etc.  I use a Chemtools Tip Tinner – it is something that has powdered flux and solder that reactivates the desoldering tip – also used for soldering irons.

[Note2]  When the electrolyte dries out, the capacitor’s capacitance will be reduced – which means that its function in the circuit, for reducing ripple, will be degraded.  Also the drying electrolyte will have a higher ESR (Equivalent Series Resistance).  This higher ESR also causes the capacitor to dissipate more power which leads to more heating – this is the mechanism that means that once it starts, it will continue until failure.  I have an ESR meter and with this I could test the other four capacitors to see if they are still functioning well – and then decide to replace or not, but the five failed ones definitely require replacement.