The Nexus 7 battery being charged by my Swallow Advance battery charger completed charging this morning. 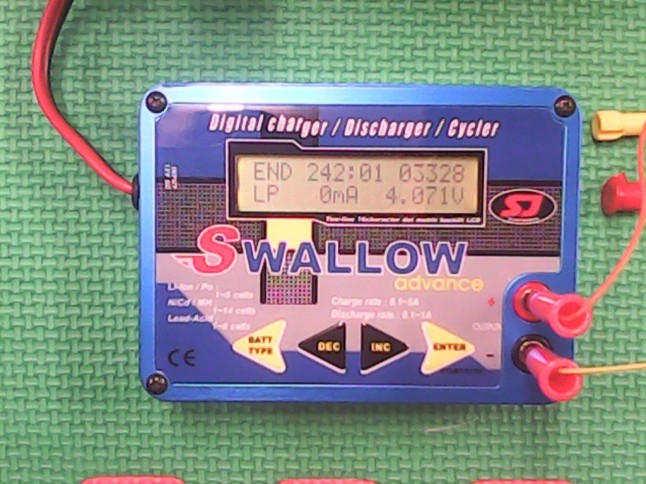 3328mAh of charge was accepted by the battery – this is a little higher than the 3300mAh charge from the previous day.  If the rated capacity of the 1st generation Nexus 7 is 4375mAh, then this battery’s condition is at about 76% of new.  Each full charge/discharge cycle has a tendency to reduce the lifespan and capacity of a battery.  Most batteries of this type should provide 100% capacity during the first year of its life.  However due to shelf life and storage before use, this capacity may be lower than the rated capacity.  As this battery is at least 2 years old by now, a 76% capacity is actually not too bad and is reasonable for its age.

If you wish to prolong Lithium batteries, you should charge them frequently, but not to full charge, and don’t discharge them all the way.  By having shallow charging and discharge cycles, the life of the battery can be extended.  The downside is that you won’t be able to run the whole day on them otherwise they will go flat.  Always there are advantages and disadvantages, so it is best just to use your normal routine.

Ok – I reconnected the battery to the Nexus 7, and put the back cover on.  I had to press the power button for 30 seconds before it would turn on.  After waiting a while for the screen colour blobs to go around and around, the normal screen came up.  I plugged in the Asus charger and the Nexus displayed “Charging 93%”.  The other applications started up, together with the wireless, and the display was now “Charging 92%”, etc.

After an hour, I noticed that it wasn’t charging, so disconnected the charger and reconnected.  An hour later it is now saying “Charging 82%”.  This is what many Nexus 7 owners are complaining about.  I did vacuum the micro-USB socket – to get rid of dust and lint, which can get in the way of a good connection.  Dust and lint are good at attracting moisture – which then leads to corrosion.  Corrosion is the bane of all electrical connections, so keeping connectors clean is a good idea.  I just vacuumed my Samsung Galaxy S2.

I don’t know the pin code to unlock the tablet – I will have to get that.

I have an update on the Nexus 7 battery that I had charged overnight.  The charging was done on my Swallow Advance battery charger which is capable of charging Lithium Polymer batteries among other types.  Now, this tablet is the original one from 2012, and it is supposed to come with a 4375mAh battery.  I was charging it as a 3000mAh – the question is why?  If I am charging a battery of unknown condition, we should not assume that it can accept full charge unless we know something of its condition.  In addition to this, the characteristics of LiPo batteries are probably not well known.  My charger and others in the market will charge at a maximum rate of 1C where the C is the capacity of the battery in Ah, so by choosing 3000mAh, I am setting a maximum charge rate of 3A.  Once I know that the battery is ok, I can choose to charge at its rated value.

This morning, the charging had stopped and a capacity was shown as being 3300mAh – meaning that the battery had accepted 3300mAh of charge.  I had then set a conservative discharge current of 0.3A and started a discharge cycle.  Once the battery voltage gets down to 3.7V, it might only have a small capacity remaining – the actual capacity will depend on the battery characteristics which we might not know, but can determine through empirical testing.  In this case, it had already been discharging for 10 hours when I left  for dinner – it was completed when I returned.  Here is a photo of the battery charger status screen. 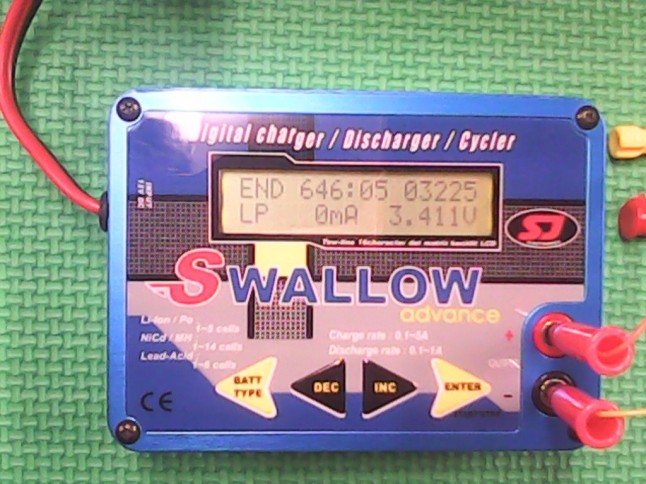 This shows the current battery voltage to be 3.411V, discharge time of 646min 5 secs and 3225mAh of energy taken out.  This means that the battery is in very good condition, especially if I put in 3300mAh and got out 3225mAh. 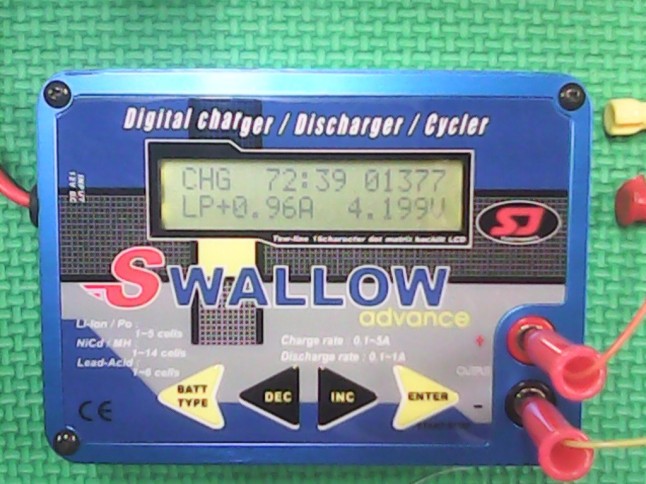 After 72 minutes, it has already gone into the constant charge voltage stage, has received 1377mAh of charge and current charging current of 0.96A – so now, I wait and see what the capacity gets to – it should be higher than 3300mAh.

Now, what does this mean about the original problem – of the Nexus 7 tablet not charging intermittently.  This test has determined that the battery is capable of accepting and delivering charge – in other words, the battery is in good condition.  As LiPo batteries get old, they will stop accepting much charge and deliver less, but not in this case.

We have tried other AC power adapters and this was still happening.  This rules out the power adapter and the battery – the only thing(s) left are the charging circuit in the Nexus 7.  A check on eBay shows that there is a USB charging port flex cable available for the Nexus 7 1st generation – which this is.  It will cost $18 or so – it is probably worthwhile getting it as this may be the problem.  Anyway, first things first – when the battery is fully charged again, I will reconnect it and make sure that the Nexus 7 turns on and sees that it is fully charged.  If it doesn’t do that – it could mean that something else is wrong – it would not be the first time that a battery voltage monitoring circuit has a defect and keeps reporting that the battery voltage is different to what it is.