A week or so ago, my son’s BMW Z3 had its battery replaced.  The car hadn’t been in use much – and we had charged the battery occasionally, but we must have left it too long, so the last time we tried charging, the battery charger indicated a battery failure.  Battery voltage was about 8V – much too low, hence a battery replacement was needed.  I got a good price from Onlinebatteries, with a great price on delivery – only $10.  What was even better was that the battery was delivered that afternoon, and the guy even helped with removing the old battery.  Here was the problem – he showed me that the battery clamp bolt would not loosen.  The bolt is about 7.5 inches long, and after some fiddling, it broke off in the hole.  Ok – no matter, at least the faulty battery can come out and within a short time, the new battery was installed.

Now, unless the battery is fastened properly – if the car goes over a bump, the battery might jump around – not good, and would invalidate the warranty.  That was a week or so ago.  This morning, I had a bit of time, so drove the Z3 down the road to our local mechanic.  He said that it is very fiddly to fix, and suggested that we just drill out the bolt, and either rethread it, or (like some people on the internet have done), put a bolt in through the bottom of the car, and have a nut on the other end.  Since I have most of the necessary tools, I decided to have a go at it.

Of course, the spare wheel – a space saver, is mounted under the car, so this needs to be released and dropped down.  I don’t want to drill the bolt, then go through the tyre.  I center punched the end of the bolt, which fortunately had snapped off flush with the mounting plate.  I drilled it out with a 3mm drill first – keeping the drill as vertical as possible.  Then followed up with a 4mm drill, and lastly a 5mm drive – which jammed in the hole.  Life was not meant to be easy – I hear that sometimes.  With a bit of wiggling and some WD40, the drill came loose, and this time I drilled, pushing gently and eventually went through.  It appears that I didn’t quite drill it centrally – or the hole wasn’t vertical, one or the other.  I poked around the hole, and the remainder of the bolt came loose, and I was able to push it out the bottom of the hole.  It was time to clean up the thread – or time to “retap.it” or “rethread.it“.  The bolt was a Metric 6mm bolt, so I began tapping with a M6 starting tap, which I was able to do by hand.  Next was an intermediate tap, followed by a finishing tap. Great – I tried a handy M6 bolt and it threaded ok – just a bit looser than usual.

Since I didn’t have a replacement bolt on hand, I decided to put everything back in, after vacuuming the battery compartment, removing a lot of debris – that accumulated with time. A thought then occurred to me, the M6 bolt I had tried, it is similar to the original bolt, but without the flange that presses on the battery clamp.  I could put a nut in place and that would be the flange.  The bolt is much too short, but my 10mm nut driver would reach the bolt even with the battery in place.  So, I inserted the bolt with the clamp, and was able to tighten it so that the battery didn’t move.  It could well be serviceable for a time at least. 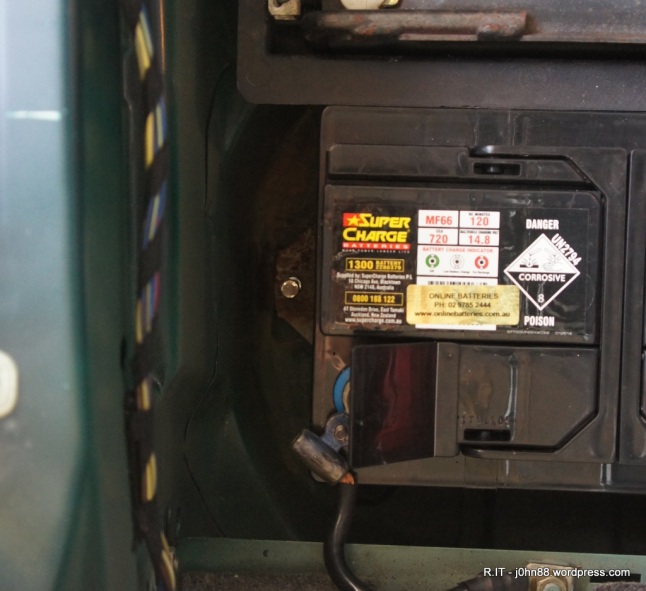 In the photo above, you can see the new battery and to the left (in the middle), the clamp with the improvised bolt to keep it fastened.  The plastic panel is still to be mounted, which covers all of the tail light wiring.   The plastic panel had been removed in order to get my drill to be able to drill vertically – as it was getting in the way.  I had carefully put all 9 assorted screws and bits and pieces into a plastic bag, and remembered in which order everything went back together.  All well and good!  Another successful repair.  I don’t think my son will be paying me for the 2 hours or so that I spent on this.

[Note] I was able to get the remainder of the bolt out, during the vacuuming. It showed me that the drill went in at quite an angle, yet I was holding the drill very much vertically. It turns out that the original bolt was tightened so much, that the mounting plate was warped to one side, so by drilling vertically, it went into the side of the hole.  Since only part of the thread is intact, this might explains the looseness – but it does tighten up, so we could leave it.  If in the future, I want to fix this properly – I would be best to use a thread repair kit, this is one where the hole is drilled out, and threaded then a M6 threaded insert is screwed in place.  This would then give a proper M6 hole for the bolt to go into.  Maybe that is a job for later, since I don’t have those repair kits on hand – but they are available locally.