Not sure if re-adjusting is a real word – please let me know if there is a better word.

Most of us who live in houses, often have a garage.  The garage door can be either manually operated or remote-controlled.  My garage door had a problem some time ago, which I thought I had written about, but can’t seem to find it.  It had a broken spring, which meant that with only one working spring, the door could not be opened fully and would only raise about half way.  Ok, this is a different story – where the remote control would work, the mechanism would make a noise and the door would … not open.

This happened a couple of years ago, and a couple of years earlier as well, and I had never really thought about writing an article on it, but as it turned out, on Monday night – my kids came home with the car, and the garage door would not open.  I opened the internal door and could see that the garage door opener light came on, but the motor did not spin and the door would not open.

This afternoon, I removed the two light bulbs that are on the garage door opener mechanism and then removed the cover.  I decided to have a look at the entire mechanism, which is relatively simple – in terms of parts.  A remote control receiver, gets it power from the opener, and in turn, activates by way on an internal relay, the input contacts of the opener.  The opener contains some power circuitry, like a transformer to reduce the line voltage to 24V, and a relay, some lever switches, and a motor with a separate gearbox, and a couple of limit switches. 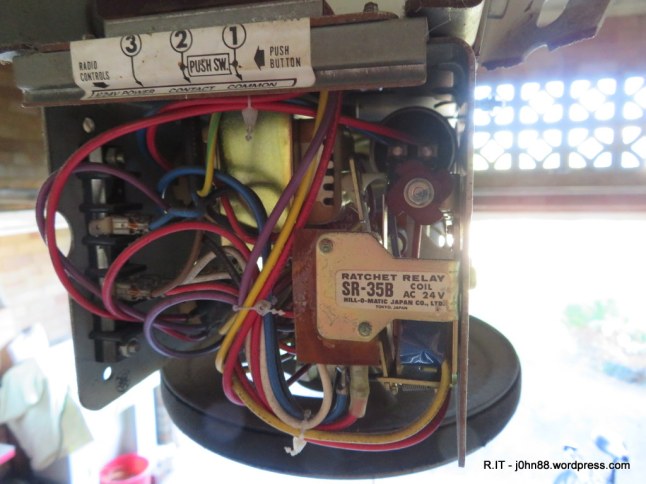 Rear of Garage Door Opener, with cover off, and the cam wheel adjusted until it is working.

Importantly, it also had a ratcheting type of arrangement that would turn a special four sided cam wheel which is part of a ratchet relay marked with SR-35B.  Now this four sided cam wheel is usually what I moved previously to fix the problem.  The cam wheel only turns one way, and lever of a switch rests on this wheel in the fully down position.  A bit hard to explain, anyway, I turned the wheel clockwise (from my perspective) until the lever switch engaged and suddenly the mechanism kicked into life and the garage door started opening and continued to open until it was fully open. 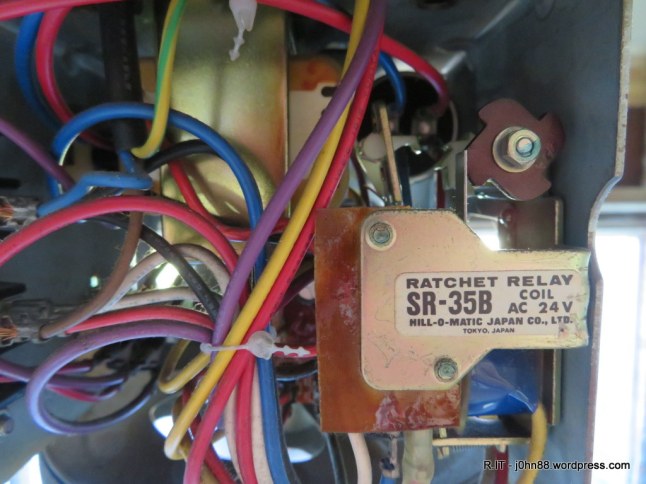 Closeup of cam wheel – the silver lever was on the flat section when not working. You can see the white ratchet gear just behind it.

This is when I decided to take a photo of what it looks like.  Behind it is what appears to be an actuator on a solenoid that has this weird toothed hook, that pushes a ratchet gear that I could see in another photo.  It looks like it pushes the ratchet gear, one quarter turn each time.  So there is was, a re-adjustment of the cam wheel and the garage door opener works again. 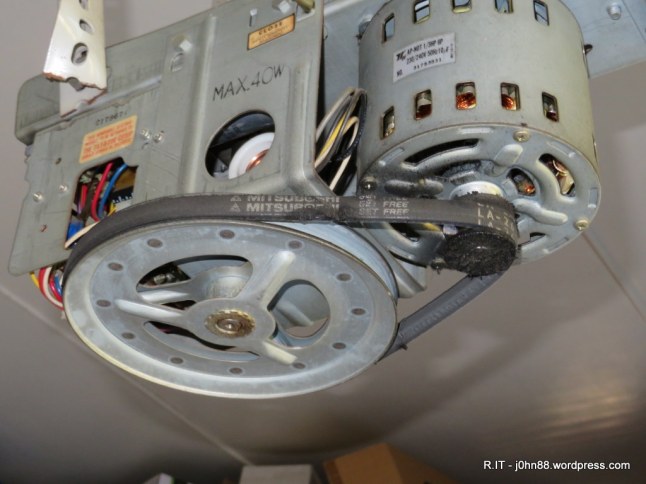 Oh dear! The V Belt looks like it is a little torn, and you can just make out cracks on the inside of the V – bottom right at the edge of the metal wheel.

While I was at it, I had a look at the motor and can see that the rubber belt is starting to come apart, and has some cracks in it, so might need replacement in the near future.  Now might be the time to get a replacement belt, don’t you think?

In any case, the garage is back to working order – until next time this happens, I suppose.